Hazon is a recipient of a Gendler Grapevine Project “L’dor V’dor” grant. For their initiative, they are developing a ritual craft making project in Teva, their experiential Jewish environmental education program for middle school children. Through this initiative, they will develop lesson plans for five ritual crafts: Wood-burned Challah Boards; Recycled Glass Kiddush Cups; Recycled Metal Washing Cups; Hand-whittled Yads; and Hand-spun Tzitzit for Talit. These lessons will be implemented as part of the regular Teva curriculum. The lesson plans will be made available in both hard copy (for teachers to take back to their classrooms) and on the Hazon website for anyone to use. Hazon will be promoting the project and its connection to the Gendler Grapevine Project through the Hazon e-newsletter, through a dedication in the lesson manual, and on the Hazon website. The long-term plan is to make the Ritual Crafts program available to all of the visitors to Isabella Freedman Jewish Retreat Center.

Descriptions of each of the craft activities are summarized below: 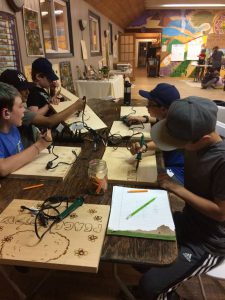 Wood-burned Challah Boards. Through this project, students have been moved to create art that is intentional and meaningful to them, decorating boards with Hebrew lettering, Jewish trees of life, and beautiful designs. Students’ interest in the project has been realized when they have chosen to continue working on their boards during their free time, rather than spending time relaxing with friends. This has happened during more than one program. Several of the teachers joined in and were as enthusiastic as the students. One noted that it felt good to “make something creative with my hands again.” This lesson has already grown beyond just the Teva program and hundreds of Isabella Freedman visitors have created this beautiful, hand-made Judaica. 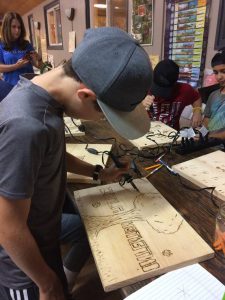 Recycled Glass Kiddush Cups. Old wine bottles are collected from the retreat center’s Shabbat dinners. The bottles are then scored and cut and the edges are sanded to create a Kiddush cup from the bottom of the bottle. Participants create a design on the cup in masking tape, such as flowers, their initials, or an image of grapes. The cups are then placed in a sand-blasting cabinet. After sandblasting, the tape is removed, and the areas it covered are now smooth while the rest of the cup is sanded – elegantly highlighting the design. The final project – even when made by those of a young age – is a professional looking, beautiful piece of Judaica. The sand in the cabinet is re-usable, and the cost for the activity after the initial investment in equipment, is very low. It is a project that could be easily replicated at other institutions. 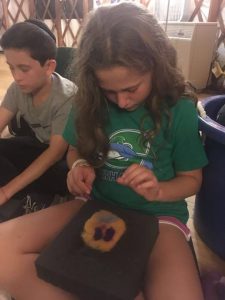 Recycled Metal Washing Cups. For this project, participants recycle a tin-can into a washing cup. First, they take the can and decorate it with paint. Then, they make handles by bending old metal spoons, forks, and butter knives into shape and riveting them to the side of the cup (the rivets are water-tight). 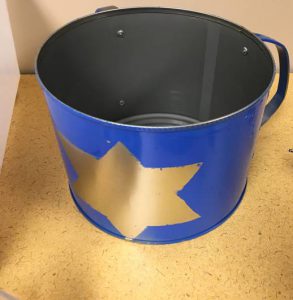 Hand-whittled Yads. This activity has been running since Teva’s spring programming, and they have many stories of students’ enthusiastic responses to the project. The students were excited to receive professional-level tools to create their yads and were heard saying, “I can’t believe we get to do this!” Some students took the project to the next level by decorating their yads. One notable quote from this project came when a student finished her yad before the other students. She left the group to wood-burn decorations into the yad. When she brought it back to show the group, the others were impressed. One student said, “Wow, are you going to use that at your bat mitzvah?” She proudly responded, “Yeah, probably!” This exchange demonstrates an outcome Teva hopes to continue achieving – that students will be proud of their work and will be able to incorporate it into their personal ritual experience. This project has already spread to the rest of the retreat center. 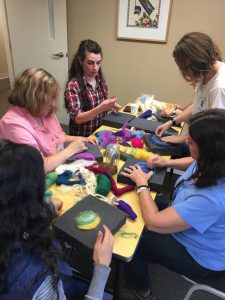 Hand-spun Tzitzit for Talit. Originally intended as a Tzitzit-only making project, this project has grown to include a wider array of Judaica made from hand-made textiles. Students will get to see and use drop spindles (the simplest way to create yarn) and Tzizit, and learn how to use a loom – and the creating of a Tallis – in action. There is now an added element of creating a hand-felted Kippah by taking loose wool and a needle and using an up-and-down motion to knot the wool together on a board. The students are very excited to make their own kippot. 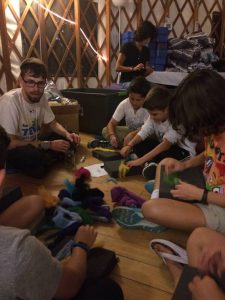 Teva Educator Training. With the support of the Gendler Grapevine Project, Teva has been able to include these crafts as a central part of the 4-day experience for visiting students. The crafts were extremely popular with educators and students. Educators invested significant time perfecting their projects beyond the initial crafting sessions. For example, there were several gorgeous kippot created, one featuring a mushroom. As part of their assessment, Teva has learned that the staff really enjoyed teaching crafts. Teva believes these crafts have been so warmly received because people are looking to be creative and self-expressive with their Judaism.

Extending Activities Beyond the Teva Circle. Several of the crafts, including the Wood-burned Challah Boards and Hand-whittled Yads, are already being taught regularly by other departments at Isabella Freedman, and they anticipate that others will also be implemented and will become very successful. The Hand-spun Tzizit for Talit, Wood-burned Challah Boards, and Recycled Metal Washing Cups were recently taught by Elan Margulies, Hazon’s Director of Education, at the JOFEE Network Gathering, and the activities were well received.

This autumn, staff will teach these activities to approximately 600 students who will be coming on retreat to Teva at Isabella Freedman with their schools between September and December. This year’s Teva program is designed so that each student will get to choose at least one craft activity to participate in and take home with them. Over the winter, the curriculum will be formalized.

Everyone is very excited and encouraged by the positive reception that these crafts have had so far and are encouraged that they’ve already expanded to an audience beyond the Teva program. These activities are helping participants to reconnect with the earth, Jewish practice, and their personal creativity.