Growing and Counting the Omer at the Louisville J

You shall count off seven weeks; start to count the seven weeks when the sickle is first put to the standing grain. Then you shall observe the Feast of Weeks for the LORD your God, offering your freewill contribution according as the LORD your God has blessed you. (Deuteronomy 16:10-11)

During the seven weeks between Passover and Shavuot, Jews count each day of the omer, adding up the days as we transition from one festival to the next. The Torah tells us that the counting begins right after Passover, “when the sickle is first put to the standing grain.” In the ancient Near East, this would have made sense—Passover and Shavuot bookend a two-month period during which farmers harvested grains such as wheat and barley, and the Israelites, largely a nation of subsistence farmers, would have easily understood the religious significance of counting the days and the blessings of the harvest during the omer (a word which itself literally means “sheaf”). 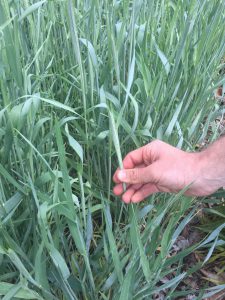 Michael’s omer at the J

But how familiar are today’s Jewish communities with standing grain and harvest seasons?

At the Louisville J, we re-introduced people to the original meaning of counting the omer by planting wheat and rye in our community garden. Many of our members were not aware that the omer was originally a harvest tradition, and of those who were, even fewer (myself included) had previously had much of a chance to get up close to grains growing in the field.

We used our home-grown omer to educate members about the long-standing connections between Judaism and the natural world by filling our lobby with sheaves of grain leading up to Shavuot. In addition, multiple Hebrew school, summer camp, and adult volunteer groups who visited the garden had a chance to see and touch the grains up close and to learn about their importance in Jewish history and tradition. 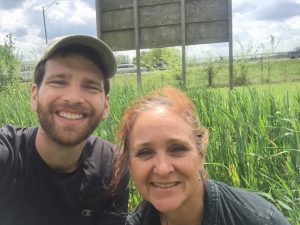 Michael Fraade and Karyn Moskowitz amongst the wheat and rye

As part of growing our omer, we ran a special multi-week program with the J’s Early Learning Center so that we could introduce our preschoolers to Passover, Shavuot, and the J’s garden. Each week the different classrooms came to the wheat and rye patches. They each got to handle some of the grain stalks and were able to touch, smell, and ask questions in order to learn more about what was growing around them. We measured the height of each plot to see how much the grains had grown since the previous week and counted all the way up to that day’s omer number as a group. In the last week before Shavuot we demonstrated how grains are ground into flour, and together we mixed up challah dough while singing songs about challah and Shabbat. By the time Shavuot rolled around, our three- and four-year-olds all knew the difference between wheat and rye and could tell you that those grains are used for all sorts of foods that they eat every day.

I have always enjoyed the sense of anticipation that comes with counting the omer, especially in the week or two right before Shavuot when the nightly count serves as a reminder that another festival, and the anniversary of the receiving of the Torah, are right around the corner. But I particularly enjoyed this year’s omer practice and the way in which it allowed me and other members of my community to engage with our traditions in a new fashion. The changing seasons were of critical importance to our ancient ancestors—they lived their lives based around the cycles of the year and infused their ritual practices with a deep appreciation for them. Technological advances and globalization have made most of us less closely attuned to the natural world, but we are still very much a part of it, and very much dependent on it. Growing our own grain at the J invited people to ask questions, to pause, to reconnect with the sun, the soil, and the beauty of the world around them. As we continue to expand our Jewish outdoor, food, and environmental education department at the J, I hope that opportunities like this will help bring our community a greater appreciation for the richness of the earth and the ways in which Judaism honors and celebrates that richness.