Every year on Martin Luther King, Jr. Day, I’m reminded not only of the civil rights movement, of the sacrifices so many people have made to work toward equal rights, and of the work that people are still doing to ensure that everyone is treated equally, but also of my uncle. 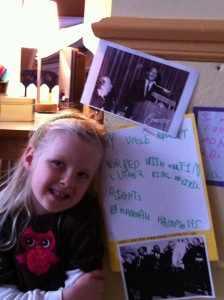 When my Uncle Everett was studying to be a rabbi, he took great interest in the issues of justice and peace. He drew connections between the Jewish experience of working for freedom and equality to many other communities, people, and cultures who are also not always treated with the respect and dignity they deserve. This passion is what led him toward a unique rabbinical practice that has inspired and moved people to think and act in deeply meaningful and profound ways for the last 50 years. 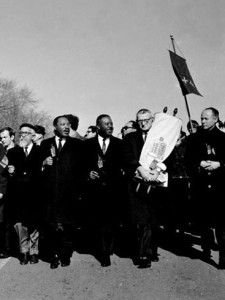 My uncle (on the far right) marching with Dr. King and other civil rights leaders in Alabama 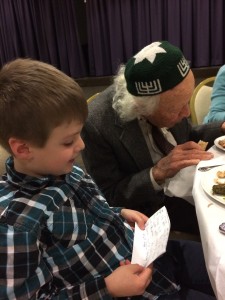 Uncle Everett listening intently to my son reading an essay he wrote about his great Uncle Everett’s work with Dr. King at a special MLK Day weekend shabbat service

I’ve thought for a long time about what it is that allows him to meet such interesting and important people while also being a leader in his own right. He doesn’t always meet these people when they were well known, either. Like I said, he met Rosa Parks before she became a household name. So how is it that he finds himself in contact with so many amazing change makers? I think it has to do with the fact that his actions are guided by what he thinks is right, not by what society says is the right thing to do at that moment. He has a strong moral compass, and it has guided him on a path that very few others have traveled and many look at in awe. 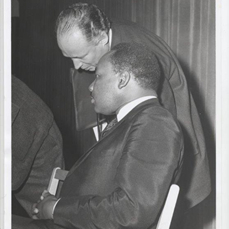 It is an amazing experience to grow up with someone like this in your family. To have an example that there is always something you could be doing to make the world a better place. I’ve always admired my uncle’s ability to stay true to his convictions, even if they were not seen as mainstream or popular. This steadfastness has been an inspiration to me to not just sit back and watch what is happening to the world around me, but to act! I especially need to act when I see something happening that I don’t think is right or just.

I recently had a discussion with my 9-year-old daughter about the hard lesson of learning when to enter into a discussion and when to keep one’s mouth shut. I explained that there are times that she’s going to say something that will make people uncomfortable with her beliefs, her words, or her actions. Sometimes, it isn’t worth the tension. But, other times, she’ll know that her voice needs to be heard. I then presented the example of when Uncle Everett was arrested with Dr. King. He certainly made a lot of people uncomfortable. But, he knew that standing and marching with Dr. King was an important action that would have a lasting impact. And, impact it did! 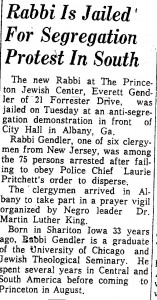 At the Gendler Grapevine Project we are working to perpetuate this vision of not just talking about what the right things are, but also doing something to make real change in the world. My uncle’s rabbinical practice was one that inspired others to make change – not just in their own lives, but also in their respective communities. With your support, we are able to fund projects that are making real change. As we get ready to prepare our 2016 initiative, we look at the 22 projects that we’ve already supported and are happy that there are examples of bold actions that are helping make our world a little more just, sustainable, and peaceful.