This post originally appeared May 9, 2014, on Religious Action Center of Reform Judaism’s blog.

Thirty six years ago, when Jimmy Carter was president, he established a number of regional Solar Energy Centers to encourage the use of sun-fueled electricity. Attracted to the idea of plugging our temple Eternal Light directly into the sun, I and several members of Temple Emanuel, Lowell, MA, investigated the feasibility of converting our Ner Tamid to solar power. 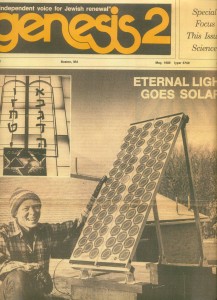 Its symbolic appropriateness is evident. Non-polluting, not in danger of imminent depletion, it seemed perfectly suited as a pure symbol of illumination and eternity. We obtained two solar panels, storage batteries for hours of darkness and periods of heavy cloud cover, and at the dark of the year, during Hanukkah, 1978, we celebrated its installation. People appreciated its symbolic value, and in December, 1991, we celebrated its Bar/Bat Mitzvah.

During my remaining years as rabbi of the temple, the light ever so gently kept nudging me: Why only a symbol? Why not real production of more usable electricity for your temple? The question was not easily answered. Succeeding U. S. administrations did not maintain the solar energy centers, and the necessary technical information was hard to obtain. Even though the Light was included in a Union of Concerned Scientists-Real Goods book, Renewables Are Ready, published in 1995, by then I was retiring from the temple, and so it remained symbolic, not pragmatic.

Fast-forward to 2014, when Massachusetts, led by Governor Deval Patrick, has offered assistance to towns and cities interested in solarizing. Among the communities participating in this project is Great Barrington, where we live year round. We made inquiry, received a follow-up phone call, then a preliminary interview with one of the Real Goods Solar representatives. The roof of our house is solar panel-resistant, but there is a section of our front hayfield that seemed ideal: an unobstructed stretch of south-facing land that would not be subject to unwanted shade.

The official site visit was fixed for April 22nd, Earth Day. So that morning, two knowledgeable solar technicians came and mapped the exact location for the installation this summer of 44 solar panels, enough to supply all of our electricity needs with surplus to feed back into the National Grid that provides our electricity. Thanks to policies of both the U. S. Government and Massachusetts, there are tax credits and rebates also to speed up recovering the original costs of the installation. At some time well before the coming of the Messiah, and while the panels are still under warranty, we should have not only all of our electricity without cost but earn some additional credit as well.

Granted, it has not been instantaneous, but the slow solar suasion has finally seen fulfillment. Worth noting, also, is that the number 44 is the number of candles we burn each year at Hanukkah. Add this solar dimension to the auspicious coincidence of the site mapping happening on Earth Day, and I think it fair to call it a Heavenly Earth Day.