There is a lot of energy around the Gendler Grapevine Project “The Interfaith Farm to Preschool Initiative” in Louisville, KY. The initiative is striving to bring together two communities over issues of food and social justice. As we as a society wrestle with continued racism and bigotry throughout the United States, we thought we’d share with you a story heard recently at one of the Interfaith Farm to Preschool Initiative events.

One of the leaders at Adath Jeshurun Synagogue went up to the bima and gave a 20-minute dvar torah on their Gendler Grapevine Project initiative, with a focus on interfaith relationships and food justice, using some of Rabbi Gendler’s writings as a base. Then, at the kiddush, the Farm to Preschool project director, Karyn Moskowitz, was swarmed with people who want to get involved, especially elders. They immediately sold 10 shares of the produce for the Fresh Stop. Lots of people approached Karyn with a story about living in community with African American families in the 1950s and ’60s, before many white people moved out of the area.

One man told her the following story about his lunch counter at his pharmacy, which was the first integrated lunch counter in Louisville:

The woman walked into the room and sat down at the lunch counter. The waitress asked if she wanted something to take out. She said, “No, I want to sit here and eat.” The man (the one telling Karyn this story) came out and said, “As you know, we don’t do that.” The woman said, “Why?” And he looked at her and said, “I don’t know! You are right, there is not a good reason. Have a burger.” And that was it!

One small action can change and mean so much.

He is planning come and tell this story at their interfaith gathering in June. 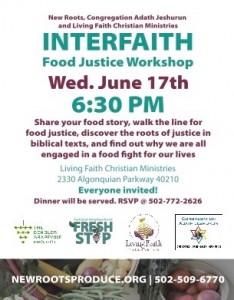