Temple Sinai DC’s program, The Open Door: Supporting Refugees, has already engaged hundreds of community members in learning about today’s refugee crises in Syria and on the US-Mexico border. On Yom Kippur, Senior Rabbi Jonathan Roos offered a sermon about refugees and the Jewish responsibility to help them. You can hear a podcast of the sermon or read the text here. 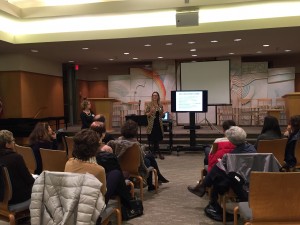 In the fall, Temple Sinai hosted a panel discussion with leading activists and scholars working on refugee issues. Mark Hetfield, CEO of HIAS; Ann Millin, Historian, U.S. Holocaust Memorial Museum; and Bill Frelick, director of Human Rights Watch’s refugee program, briefed attendees on the current crisis with Syrian refugees, conditions they face in Europe, ways America can help, and the lessons from Jewish history. Mr. Frelick had just returned from a trip following the path of refugees from their landing sites in the Greek Islands through Western Europe and its official and unofficial refugee centers.

That same week, The Open Door hosted staff and supervising attorneys from the DC office of KIND (Kids in Need of Defense). They met with a group of potential volunteers to explain the work they do providing pro bono legal support to undocumented children seeking legal status in the US. Open Door organizers also shared the story of Temple Sinai’s partnership with KIND through which the temple provides support for a young Honduran mother and her children, who entered the US as unaccompanied minors in 2014. While a temple member serves as their KIND appointed lawyer, The Open Door provides educational support, everyday needs like clothing, and medical and dental care. This family has become increasingly independent by securing health insurance and accessing city and school programs like after-care and tutoring. Their case is advancing, and they appear to be close to gaining the legal status and protections they need as refugees. Just last week, Temple Sinai received a note from the family that one of the girls, who struggled terribly last year in first grade, was named student of the month for her entire school! 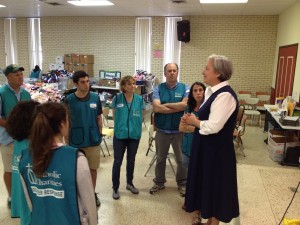 Inside the center, Sister Norma Pimentel, Executive Director of Catholic Charities of the Rio Grande Valley, explains the history of the center and trains the volunteer group to receive and help refugees.

When the Washington Jewish Week recently ran a story on Jewish communal responses to the refugee crisis, the Gendler Grapevine Project was mentioned as an important supporter of Sinai’s Open Door program. 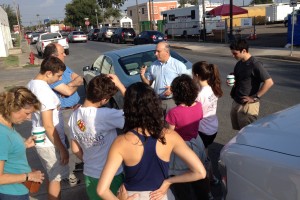 In the spring, the Temple will host a teach-in and symposium meant to further encourage community members to volunteer, get involved, and spread support for refugee relief. A group of Open Door volunteers and clergy will travel to McAllen, Texas, one of the major crossing points for Central American refugees seeking safety in the US. In McAllen, they will learn first-hand about the situation and conditions on the US-Mexico border and offer direct support to refugees at the Sacred Heart Refugee Relief Center.