With funding from the Gendler Grapevine Project and Kreiger Foundations as well as support from the In For Of, Inc. (IFO) organization, the Olam Ubuntu Youth Leadership Program will build participants’ capacity for thoughtful intercultural dialogue. Following a pilot program in 2016-2017, the current Olam Ubuntu program brings together a carefully selected cohort of young Jewish American and African American Baltimoreans ages 12 through 15 to discuss, interact, debate, and share as they envision “a world where I am because we are.” 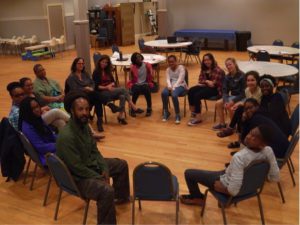 The name of the project—Olam Ubuntu—combines “Olam,” the Hebrew word for world (as in Tikkun Olam—meaning, to repair the world), with the Nguni-Bantu concept of “Ubuntu,” which means, “I am because we are.” 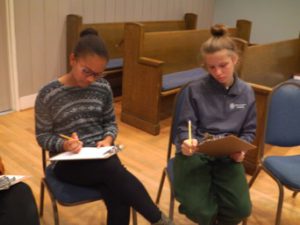 The program is led by three entities that are committed to intercultural dialogue across boundaries of race, neighborhood, income, and culture: Gabriel Pickus of the Baltimore Wisdom Project, Ras Tre Subira of the Afrikan Youth Alchemy, and IFO in conjunction with Baltimore’s Beth Am Synagogue. Gabriel and Ras Tre are the lead teaching artists. Leaders at IFO and Beth Am collaborate with Gabriel and Ras Tre as co-administrators of the project. 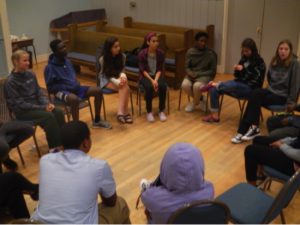 Baltimore city remains deeply segregated by race and income, and Olam Ubuntu intervenes within this continuing problem by creating occasions for sustained intercultural dialogue between African American and Jewish American youth. Their workshops and field trips give youth opportunities to learn about the most pressing issues facing their communities. By learning about each other from each other and with each other, they empower the youth to act together and unify Jewish American and African American Baltimoreans.

The first meeting of the 2017/2018 Cohort took place on October 18, 2017. There are 14 youth in the program this year. They meet regularly for Wednesday evening workshops. Twelve youth and two parents went on the first field trip on Sunday, October 29, 2017, on a tour of cultural sites pertinent to the uplift of Jewish and Black life in Baltimore. 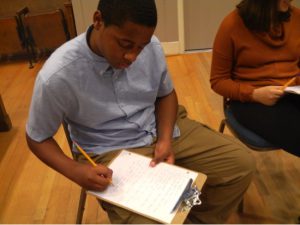 During the workshops and the field trip, the youth were introduced to the dense and complex history of cultural marginalization in the city represented by issues of race, mass-incarceration, unaffordable housing, and homelessness. They also talked about the Baltimore Uprising of 2015 in the Sandtown neighorhood and talked about community initiatives that address city residents’ disparities. Lastly, in their work thus far, they discussed Black and Jewish identity, education, and segregation.

The demographics of the participants are as follows:

Their goal is to create young ambassadors for intercultural dialogue who will be empowered to build wise cross-cultural bridges within their families, neighborhoods, communities, faith centers, and schools. Olam Ubuntu understands thoughtful intercultural dialogue and an embrace of cross-cultural integration to be essential for building the capacity for social change within the youth leaders of today and the adult leaders of tomorrow.