Hazon’s capstone project, Teva Lessons for the Classroom and Beyond, has already been a great benefit to the Teva program. Over the winter months, they drafted lesson plans for each topic. The ones that were more developed were piloted during the spring Teva season. Silk Painted Challah Covers and Clay Mezuzot were a successful addition to their ritual crafts program (which was also developed in partnership with the Gendler Grapevine Project), and Bracha Cards provided an engaging and thoughtful rainy day activity. 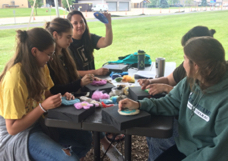 In addition to their work with Teva students and educators, Teva led a professional development training for 15 Jewish educators working in JCCs, synagogues, and camps in the Metro Detroit area. The training was designed as a way for institutions in Detroit to begin bringing Teva-style Jewish environmental education to their members. During the training, they used lesson plans from all three of their Gendler Grapevine Project grant funded initiatives; Felted Kippot from Betzalel’s Workshop, text studies on Blessing the World Around Us and Klei Kodesh from the Eco-Beit Midrash, and Bracha Cards from Teva Activities for the Classroom and Beyond. Educators were given these resources to use with their communities. Hazon estimates that, indirectly, this work will reach several hundred individuals in the Detroit metro area.

They will continue to prepare and test the lessons this summer, and then debut them at their fall Teva program.