Chanukah: A Festival of Lights

Over the years, Everett Gendler has inspired many people to celebrate holidays in unique and special ways. He does it again with his new take on the traditional Chanukah menorah, as he describes below. Please let us know if you try this and feel free to send pictures!

Chanukah lends itself to many emphases, from freedom struggle to kindling a fire at the dark of the year. Since I’ve just come indoors from gusty winds and temperatures in the teens, working on the fire and light emphasis of the holiday, let me share one possible addition to the traditional lighting of your Chanukah menorahs (and the more the better!) 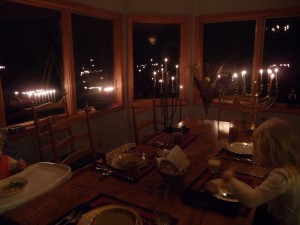 Since there are historical grounds for speculating that the actual eight days of lighting candles may relate to earlier countryside bonfires at the dark of the year, flaming torches could appropriately add to the glow of our own Chanukah observances if we’re so inclined. 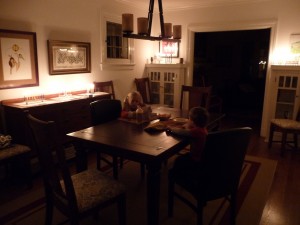 Inspired by the Gendlers’ plethora of chanukiah, Grapevine executive director Emily and her family eat dinner by Chanukah candlelight

Simplest is the following. Get hold of nine Tiki outdoor torches, take a pry bar, make holes a foot apart in a gentle semi-circle, and fix the torches securely in the ground. If there is no frost in the ground it is easier, but even an inch or two of recently formed frozen ground can be penetrated, then deepen the hole to a secure depth. The center torch that will serve as the shamash should be left a bit less fixed since you’ll need to use it to kindle the others.

In placing oil in the torches, select the amount of oil for the time you’d like the torches to stay lit. If it’s a short evening, less oil; for a leisurely time around the table or in sight of the torches, more oil.

It’s probably best to light the outside torches first, then set a-glow the various candelabra indoors with the traditional blessings and songs.

Effects? You won’t know until you’ve tried them. Perhaps you’ll find them a distraction. In that case, obviously discontinue the practice. On the other hand, you may find that the outdoor torches add a dimension to the traditional candles indoors. Either way, if you give this a try, do let the Gendler Grapevine Project know of your reactions. That will provide helpful guidance for others.

By way of historical background, I should add that one year, when Chanukah coincided with a NEFTY Winter Encampment at Eisner Camp in Great Barrington, a colleague and fellow faculty, Harold Robinson and I, did just that. Outside the window where indoors we were lighting the traditional Chanukah candles, outside we lit the torches to mirror the indoor candles. It was quite an effect with the torches illuminating surrounding snowdrifts! But even without the snowdrifts, outdoor torches can be an effective addition to the brightness of our Chanukah celebrations.

Most important, whatever surrounding lights are blazing as you observe Chanukah, may the inner light and illumination be even more intense and glowing!

Lightness and Brightness to you and yours,